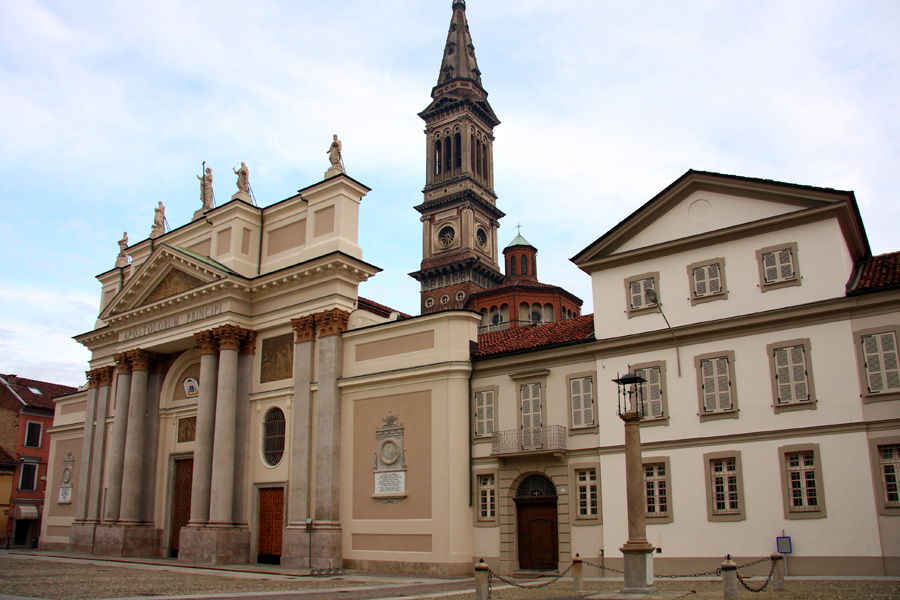 Cittadella:18th century military building designed by Ignazio Bertola, architect of the Savoy Court. The fortress is a sixstar hexagon shaped structure with six bastioned fronts and just as many wet moats, connected to the Tanaro River. The buildings inside the fortress formed the Military district in which Giuseppe Garibaldi, among others, was hosted, before he was exiled to Caprera.

City Hall Palace: This building is also known as the "Red Palace" for its front side color. The palace has covered walks opening on Piazza della Libertà and a beautiful clock with three faces, including moon phases and an astronomical clock.

Cathedral: the ancient Cathedral of Alessandria was built in 1170 and dedicated to St. Peter. This church was the center of local community until Napoleon decided to destroy it to create the parade ground (now Liberty Square). The present Cathedral was completed in 1810 and consecrated to St. Peter. Its most distinctive feature is definitely the 106m high spire bell tower (the highest after the“Torrazzo” of Cremona Cathedral). Inside the church, it is possible to admire a beautiful wooden statue of the Madonna della Salve (patron saint of the city) and beautiful paintings by Guglielmo Caccia.

Church of Santa Maria di Castello: very beautiful and charming church, located in the "Rovereto" neighborhood. It has belonged to several monastic orders over the centuries and it became a clerical church in 1798. In 1805 the adjacent convent was initially used as a military depot and then as barracks, hospital and even prison until 1918 when it became headquarters of the National Institute of War. Finally, it was entrusted to the Salesian Sisters who turned it into a school.

On our official website, we guarantee the best price available.
Book now!

Our staff is always available to assist you during the reservation process and offer you the best solution for your stay. Contact us at (+39)0143.633517 or via email at info@serravallegolfhotel.it